This is a painting of Franz Kafka born on 3 July 1883 – died 3 June 1924) he was born in Prague, now in the Czech Republic but then part of Austria.Hermann Kafka his father was a domestic tyrant, who directed his anger against his son. Kafka also had three sisters, all of whom perished in Nazi camps. Often Kafka’s stories dealt with the struggle between father and son, or a scorned individual’s pleading innocence in front of remote figures of authority. Kafka grew up in an atmosphere of familial tensions and social rejection that he experienced as a member of Prague’s Jewish minority. His attitude to his Jewish heritage was ambivalent. In a diary he wrote: ”What have I in common with Jews? I have hardly anything in common with myself and should stand very quietly in a corner, content that I can breathe.” During his life Kafka had many girlfriends, many affairs, and a number of broken engagements. In 1912 he met Felice Bauer, a twenty-four-year-old businesswoman from Berlin. He warned her that life with him would mean ”a monastic life side by side with a man who is fretful, melancholy, untalkative, dissatisfied and sickly.” Their relationship lasted for five years.Kafka spent in the sanatorium the last six weeks of his life. He suffered from thirst and in his last letter to his parents he recollects his childhood when he drank beer with his father during their visits to a bathing establishment. Kafka died of tuberculosis on June 3, 1924. Kafka has come to be one of the most influential writers of this century. Virtually unknown during his lifetime, the works of Kafka have since been recognized as symbolizing modern man’s anxiety-ridden and grotesque alienation in an unintelligible, hostile, or indifferent world. 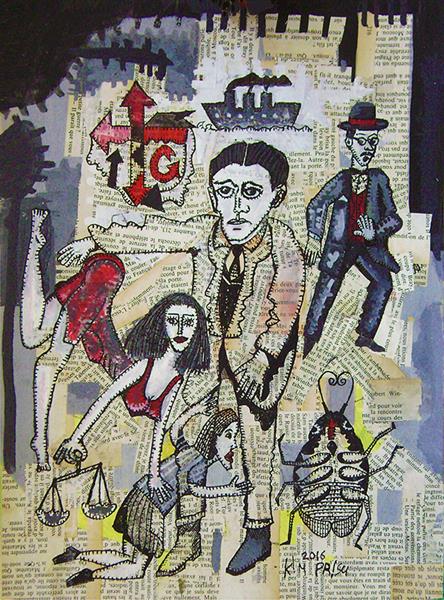